How to Remove a Hard-Wired Smoke Detector

Understanding how something works is the first step in fixing it. For this system, you need to understand that it is an electrical device. The wired connection runs throughout your entire house, and you should be careful because it has fragile sensors.

In the device, there are three wires. Two of these wires, the black and white, provide AC 120 V power that the hardwired smoke detector needs to operate.

The third wire is a red wire that connects the detector to the electrical systems in the household. When smoke is present, it triggers the other detectors in the house.

A smoke detector connects to electricity in order for it to function. Before you work on it, you should switch off the circuit breaker to prevent electrocution and check the wires using a tester before you touch them. To get to the wires to test them, remove the detector in a counterclockwise motion to detach it from the mounting plate.

How to Remove a Hard-Wired Smoke Detector

The hardest part of fixing a detector is redoing the wiring. In most cases, it is not hard it is a matter of swapping out the harness in the wiring.

Here are the steps to remove a hardwired smoke detector:

Step 1. Using a tester, test and make sure that there is no power passing through the wires, then disconnect the wires from the detector by pulling the wires and separating them.

Step 2. Remove the detector by unscrewing the screw that attaches it to the mounting plate on the wall or ceiling.

In this process, it is not necessary to remove the screws, you can leave them to mount the new device. It ensures that the holes are kept open, and you can paint over the space. If you are not installing a detector immediately, tuck the wires into the hole for safety.

1. How often do you need to replace smoke detectors?

You should replace your smoke detectors every 10 years. Also, replace the batteries at least once a year and test the system every month.

2. How long will the battery last in my smoke alarm?

The battery life of a smoke detector depends on different factors, including the environment and design of your detector. It is recommended that you change the battery the same time you change your clock’s battery, and change the batteries when the alarm system starts chirping a low battery warning. You are able to use any type of alarm battery for your system as a replacement.

3. Why does my smoke alarm keep chirping or beeping?

In most cases, when your detector is chirping or beeping, it is likely that the battery is low. This requires you to replace them; however, if you replace them and it continues chirping, you may want to consult a technician to check for a fault in the detector.

Some systems have faults that cause them to start chirping or beeping. One of the faults could be insects and dust in the detector causing power interruptions inside the hardwired systems. Another fault could be, if the systems are not wired correctly, like grounding the interconnect wire, then the AC/DC alarm can chirp. The interconnect wire connects to other compatible devices and should not be grounded.

Get a Proper Smoke Detector 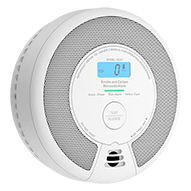